You might be pleasantly surprised!  And if you knew where we lived you would never think that less than 5 minutes walk away there is a beautiful woods. Where there is a layer of bluebells covering the floor and it is so peaceful. 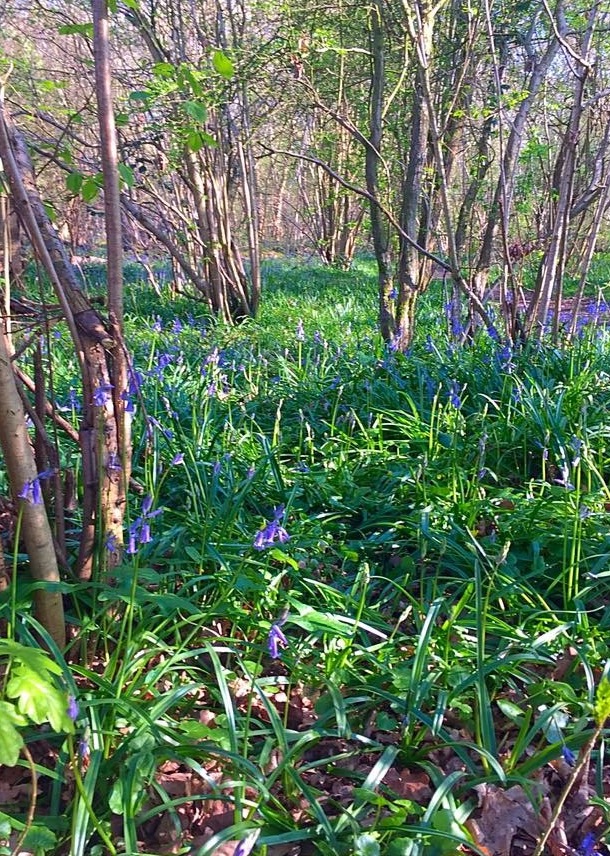 Friends locally told us about the woods near us but you can find your closest one over at the woodland trust website.

Big Pig and I go to the woods a lot. He loves to hug the trees!  Or just have some quiet time.

Last time we went he asked if we could go there with his friend from school. So I thought we’d make a morning of it.

I had a couple of activity ideas in mind but then I asked the lovely members of my Facebook group and got some even better ones!

So off we went armed with a back pack, a roll of selotape, brown paper bags, crowns and lots of snacks!

The first activity we did was to build a giant birds nest!

We chose a spot to build the nest and then the children walked around looking for different sized sticks and branches.

Some of them were really big, so they had to work together to carry them back to the nest. 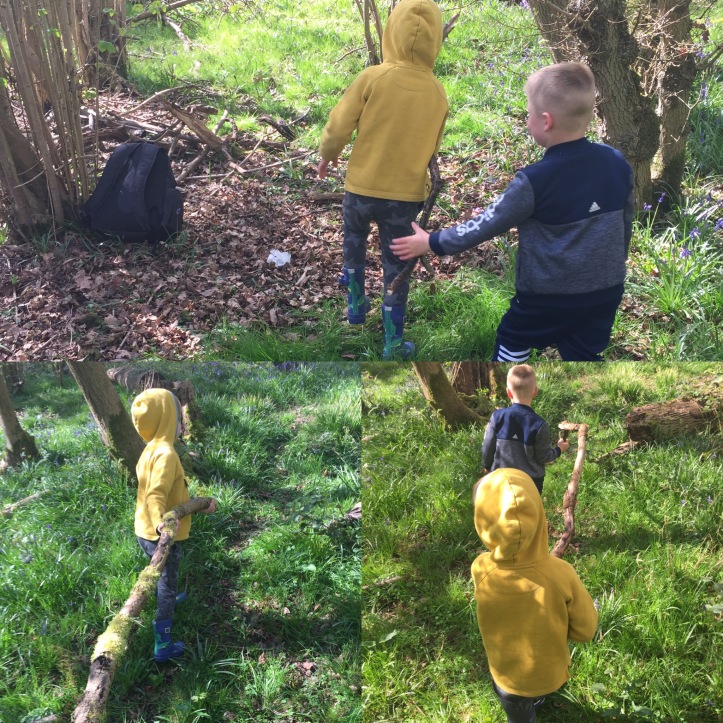 They got really excited once they started to see the nest build up and they talked about how they could attach the branches by “laying them in getween!” each other!

Once they’d finished to the naked eye it just looked like a pile of sticks but their imaginations had kicked in and they started to make up a story about a giant bird that had come to live in it. Big Pig then decided he should check that the nest was safe for the bird, so they climbed in and sat in it pretending to be birds!

We then went and found our favourite tree to have a snack and the boys decided that the next activity they wanted to do was decorate the crowns.

I’d made the actual crowns before we left.  I used a roll of brown wrapping paper and doubled it up to make it a bit sturdier.

They walked around the woods looking for natural bits and bobs to put on the crown and then we stuck them on using sellotape!

They wore the crowns for the rest of the time we were in the woods.

The next activity was a treasure hunt and they decided that they were Kings looking for their lost treasure.

I’d written some items and descriptive words on bits of paper and folded them up.

They took turns to unfold them and we sounded out the letters and read them together.

They immediately said money when they unfolded shiny and went to hunt for some.  I managed to get a couple of 20 and 5 pences and put them on the floor and then encouraged them to walk back that way. They found them all!

The treasure hunt was by far the children’s favourite activity.

We spent just over 2 hours in the woods and they were fully occupied the whole time. We really had an amazing time and they talked about what they had been up to all the way home.

We’ll be going back soon to try more of the amazing activities that were suggested by the members of my Facebook page and of course I’ll let you know how we got on.